The biggest mistake, you can make, is to give up.

When Michal was 5 months, during a standard kidney ultrasound exam, necessary because of a history of postnatal urinary tract infection, the doctor observed a tumor in the area of his left kidney. We heard then that most probably it was cancerous. When heading for the Department of Pediatric Oncology and Hematology in Cracow, we still could not believe what was happening. It could not be possible that our little precious could have cancer… but the doctor’s verdict was clear. Suspicion – MALIGNANT TUMOR – Neuroblastoma. After the exams, which lasted about 5 weeks, the suspicions were confirmed and Michal was qualified for surgical removal of the tumor (December 2011). The exams showed that the tumor was located in one place, and that is why, after its removal, the doctor decided to stop the treatment at this stage without applying chemotherapy. It was because in a low risk group to which Michal was classified, the likelihood of recurrence of the disease was very low. We were very happy that Michal would not have to undergo the serious treatment, that the disease would be over with the excision of the tumor, that we reacted quickly enough and there would be only periodic check-ups ahead of us. We did it every month and they only confirmed that all was in order.

Everything changed in July 2012. When Michal was 14 months a seemingly harmless, tiny bruise showed under his eye. After a few weeks the bruise was still on Michal’s face, which alarmed us, and our pediatrician recommended a consultation with an ophthalmologist. The eye examination turned out fine, but due to oncologic history, the doctor prescribed a CT scan of the head. The results were clear – RELAPSE OF THE DISEASE – tumor in the eyehole, and furthermore, the cancer spread also to the lymph nodes. This time Michal was classified to the highest risk group in which children have only 30 – 40% chance of long-term survival. In one moment all the fear for our son’s health and life came back. For the second time we ended up in the Department of Hematology and Oncology in the University Children’s Hospital in Cracow. The doctors quickly began to fight with the disease using the most aggressive cancer treatment. Throughout the treatment, our brave Michal would comfort us with his beautiful contagious smile, as if he wanted to say: “everything will be fine”. The hospital became our “second home” and the doctors and the staff our family.

Michal had stronger and weaker days, but he was always happy and did not show that he was fighting with a terrible disease. As if he knew that it is what all his family needs – the belief that every day we are getting closer and closer to him being healthy. Michal has been through 8 cycles of strong chemotherapy, a high dose chemotherapy called mega chemotherapy, and the bone marrow autotransplantation followed by radiotherapy. 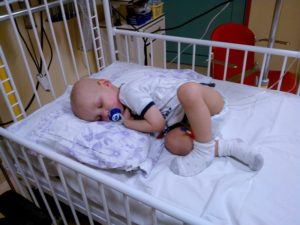 Unfortunately, these were the last treatment options for Michal in Poland, but we still had hopes for his recovery since other EU countries offered more advanced treatment options. Michal was qualified for the antiGD2 antibody therapy against Neuroblastoma cells in a Germany clinic. The treatment would increase his chances of survival by 20%. Unfortunately, the Polish Health System would not cover the antibody treatment in Germany. Therefore, this stage of the treatment depended on whether we can raise the money needed – 147,000 Euro. For us – parents, this sum of money was unreachable, we did not believe we could raise that money alone. That is why we asked others for help.

Thanks to media and You Can Be My Angel Foundation we were able to raise the entire sum in three months and Michal could immediately begin his treatment in Germany.

When fundraising for our son, we didn’t believe that we would be able to raise such a huge amount but we knew we had to try. The foundation’s bank account registered over 2,000 deposits, from just a few zloty to few thousands of zloty. Everyone who donated, donated whatever he or she could. Parents of sick children do not expect huge donations but small amounts eventually add up to the needed sum. It’s very important that those donating encouraged others to help as well.

Someone said, that by saving one child’s life you are saving entire world. Without all of those who helped us along the way all that good happened to us would not have been possible.

Michal finished his treatment in December 2013. He is still in remission and continues to be monitored. He is now 6 years old. He is a fun, energetic, and a smart little boy with a great imagination.

He adores his younger sister and has a lot of interests and passions, including football. He loves Robert Lewandowski and knows the flags of all the countries that took part in the European Championships in football. Michal’s biggest dream is to turn his room into the real footballer’s room, decorated and accessorized in everything football related.