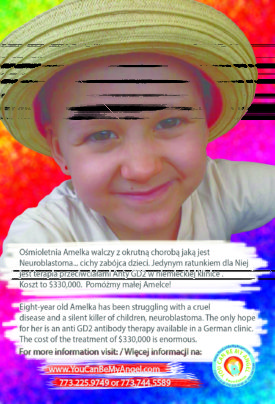 “If you have to cry, please go outside, and don’t cry in front of the children. They cannot see you cry”.  This is a single principle that pediatric oncology ward parents whisper to the “new parents”. It is the only principle determined by the parents, the rest of the rules are dictated by tumors that invade the small, defenseless children.

Before Amelka was admitted to the oncology ward she was treated by an orthopedic surgeon and a family doctor. Nobody knew back then that the cancer is growing, moving body parts, wrapping around them and pressing on the nerves. -“Mom, my leg hurts.”- 3.5-year-old Amelka began to complain. She started to limp, so the parents went to the doctor. Orthopedist treated her for flat feet and recommended exercises, which caused the little girl even greater pain. She wore corrective shoes, but the pain only increased. After a short time her tummy grew, and for that she received a half-liter bottle of syrup. Malignant camouflaged itself, the tumor grew, and Amelka drank syrup and practiced flat feet. One day, one of the legs hurt so bad that Amelka stopped walking.

The ultrasound detected a large mass in the abdomen alien. The tumor was the size of 17x10x10 cm, occupied the entire abdominal cavity, and wrapped itself around the spine. When it was discovered, the tumor had filled vertebrae of the spine. Diagnosis: Neuroblastoma, pediatric cancer, stage IV.  Amelka was in such poor condition that she didn’t notice bald children in neighboring beds. She did not see the children fighting for their lives. She did not see their parents, who whispered to the “new parents” that one simply does not cry here. She did not see those tears either.

– Will Amelka get through this? – The mother asked. The doctor dropped her eyes. It turned out that malignant has an ally, a genetic mutation n-MYC+, which helps cancer cells spread through the body. Amelka was not walking, had the worst form of pediatric cancer, and on top of that a mutated gene helped destroy the body and weaken Amelka’s chemotherapy.

An oncology ward purposely has no mirrors, so that the disease does not reflect itself in them. Amelka’s hair was everywhere. – Mommy, my hair’s itching me – said Amelka. With tears in my eyes I cleaned the pillow, and every day would find new strings of Amelka’s hairs. – I cannot do it – I said to my husband when he came with a hair cutting razor. I did not know what to say, when I saw my little girl’s bald head, but the silence was interrupted by a nurse, cheerfully saying, “Amelka, you have such a beautiful earrings. I never noticed them before, because your hair hid them. And these are beautiful!”

The doctor mentioned an antibody GD2 therapy. The tumor can be removed, but the mutant gene will remain, so the disease can return. Recurrence is usually more aggressive than the original disease. – Amelka’s chance at normal life was the antibody GD2 therapy in a clinic abroad. Therapy could not have been carried out in Poland, nor was it reimbursed by the National Health Fund. An Italian clinic estimated the treatment at €40,000 ($50,000).

After 13 rounds of chemotherapy the tumor decreased in size and became operable. On May 20, 2014 doctors removed part of the tumor. However, part wrapped around vertebrae of the spine was not removed due to excessive risk of damage to the spinal cord. Doctors hope that chemotherapy will cope with that part of the tumor.
On August 7, 2014 Amelka traveled to Lublin for autograft bone marrow transplant and that’s where she spent her 5th birthday. Prior to the transplant she received a very strong chemotherapy. On November 12th she began another round of chemo.

Everyone then believed that the next birthday she will spend at home. After 46 days in isolation, she finally went home.

How much tears, how many hours in a hospital must a parent endure?  Instead of taking the child on trips and showing her the world, we think whether or not all the big bad luck in fighting the disease will be lucky enough to win it? Does one require to spend long years in oncology to overcome cancer? Our drama was due to end in 2015, after two years of chemo, checkups, and surgery. After two years of fighting cancer and at the beginning of January 2015, Amelka started anti body treatment in Genoa, Italy – the last stage of cancer treatment. Within five months, she had undergone 5 cycles of antibody. At the last check in Italy doctors have suggested removing the residual tumor mass located at the spine. After 29 long months of fighting cancer finally we could talk about winning. The tummy was clean! Amelka spent her sixth birthday at home.

Amelka went through hell. Our child knows a lot better what suffering is than us parents. We lost it several times, several times the cancer almost took her from us. Now it was going to be good, the worst was to stay behind. In February we went for a checkup. One word was enough for the nightmare to return. Recurrence! Cancer does not let go. It gave us an illusion, it gave us hope only to return with redoubled force. For the third time Amelka received chemo. Again the hospital bed, again handful of hair on the pillow and again chemo so strong that it burned veins and weakened her to the point that she could not stand on her own feet. After 6 cycles she was operated on. Remains of the tumor that could not be removed had to be destroyed with megachemo.
We are after autograft. If we stop taking treatment now, cancer can take our Amelka forever. In Poland there is no longer any help  for us. To continue treatment, we have to go abroad. Anti-G2 antibody therapy at the Greifswald clinic in Germany is the only and last chance for Amelka to overcome cancer.

4 years ago our life turned into a hell of cancer fight. After a year’s break we returned to the oncology department. We believe that after 4 operations, a dozen blocks of aggressive chemo and years of destructive fighting we will eventually win. We are getting closer, but if we do not get timely treatment, we can lose everything. The price we have to pay for our daughter’s life is unimaginable. We beg for your help. We are facing you as the parents of a deadly child and we wholeheartedly ask you to help save our only, beloved daughter …

Let’s help Amelka win her battle with cancer. Together we can accomplish a great thing here, together we can help to heal a little girl. Because children’s can’t fight cancer alone!