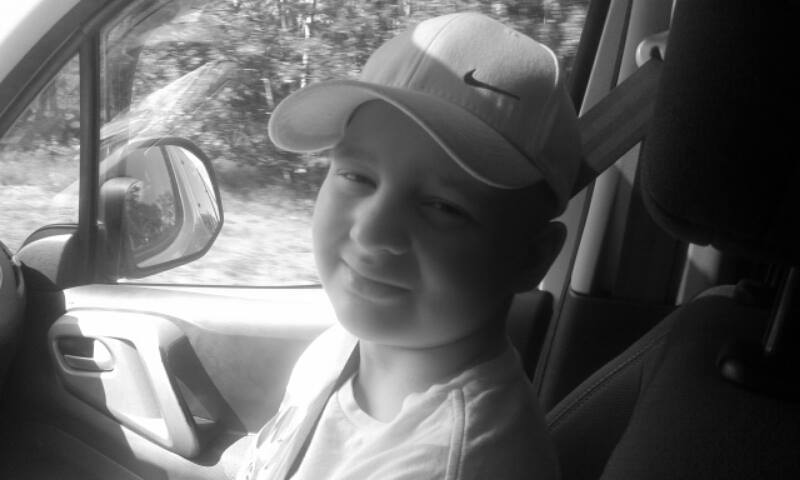 Dominic was born completely healthy. There was no indication that something was wrong in his body until he turned 6 years of age. His parents did not even expect that soon they will have to fight against a cruel disease.
It started innocently in May 2009 with the pain in right knee, and then hip, with time came aches in other bones and joints. Each doctor came back with different diagnoses. Finally a rheumatologist diagnosed juvenile idiopathic arthritis. The doctor prescribed steroids and so for 4 months Dominik was treated for rheumatism.

Unfortunately, after 4 months Dominic began to have terrible headaches and vision problems. A CT scan revealed a hematoma in his head. Doctors carried out trepanation of the skull from which Dominic recovered rapidly and returned home. Two days later Dominic was admitted to oncology and hematology clinic in Poznan, the diagnosis was definite, neuroblastoma, one of the deadliest and least-understood childhood cancer.

Subsequent procedures had shown metastases in the lymph nodes, bone marrow, bones, and the primary tumor in the mediastinum. When Dominic was fed steroids for arthritis, cancer was already feasting on his little body, reducing his chances of survival. Dominic was given a 5 % chance of survival. Parents decided that they will do everything for Dominic to find himself in those 5 percent.  Every day and night that Dominic spent in the hospital, his mother was with him, she did not leave, even when fatigue reached its zenith.

Dominik went through very aggressive chemotherapy treatment, tumor resection with mediastinal autograft, and radiotherapy. Doctors said it was a miracle that with so many metastases Dominik was finally clean.  Parents were hopeful that the fight with the disease had come to an end.  Instead of pictures from the hospital they collected pictures of moments away from everything that was associated with the disease.  A year later a checkup – and relapse. This news was worse than the first.  – Parents thought they don’t have strength to carry on, but Dominic would reassure “Mom, do not worry, I can do it again.”

Dominic needed a bone marrow transplant – and after a long search on Dec. 19, 2012, a 50 -year-old woman from Belgium gave Dominic her bone marrow.  It worked, but the disease wanted more. Earlier, the doctors gave Dominic a 5% chance for survival, now they said they did everything they could, applied everything available in oncology but are unable to cure Dominic. They can only prolong his life.

Chemotherapy gave parents time to seek help. They found a clinic in Germany, where children with high-risk neuroblastoma are treated by anti-GD2 antibodies and it turned out to be the only chance for Dominic. The treatment has been estimated at 143,000 Euros.

Dominik’s mother writes: “We do not have credit; we do not have anything we could sell. The only loan which we can afford is a loan of gratitude to the people who want to help us save our child. We have been in this fight for almost five years. Dominik fights and we fight even harder. The worst case scenario for us is that after remission we will not have funds to begin antibody treatment. We must do everything to not allow this to happen, we need help. Chemotherapy although effective to some degree is a poison and his body eventually will not stand another dose. We beg for help! Every day I promise Dominik that everything will be fine … he trusts me so much… I cannot let him down. He has so many plans; he wants to live a normal life, return to school, and to his friends. My child has only one life. Help us save our child, fight with us for Dominik’s LIFE.”